According to the Centers for Medicare & Medicaid Services (CMS), almost one out of the every five dollars in America is spent on health care, resulting in close to $3 trillion spent in 2014. Of that, an estimated $765 billion was lost to waste in inefficiency, redundancy, errors, overutilization and unnecessary variation in clinical practices. In addition to revenue loss from waste, hospitals are simultaneously confronted with payments that are not rising as fast as costs, and in many cases, payments that are actually declining.  The American Hospital Association even contends that one-third of hospitals presently have a negative operating margin.

Because of these troubling trends, it is no wonder that reducing the total cost of care ranks as the number one overall strategic concern for hospital leadership. Reducing cost is any industry is a difficult task, but in health care, the difficulty is compounded by the need to maintain, or in many cases, improve the quality of care, health outcomes, and patient satisfaction.

Given the difficulty and complexity, it is also not surprising that hospital executives often turn to expensive consultants for answers, only to hear the same “one size fits all” solutions to drive cost savings, that are often unattainable or unsustainable.

Hospitals Are Failing To Meet Their Targets

A July 2014 independent survey of hospital finance professionals by Strata Decision Technology concluded that 88% of hospitals claimed to have cost-saving strategies in place. However, only 17% of hospitals were able to realize their targets. Another 70% achieved “some savings,” but not the level they needed to hit financial targets.

Health care organizations cited that cost reduction efforts often fell short because they were too time-consuming and data intensive. Additionally, while some were able to “identify savings opportunities,” they found that the actual savings realized was much less than expected because ideas could not be put into action and there was a lack of accountability for results system-wide. Hospitals also cited that accurately tracking “hard dollar” cost savings was too labor intensive since they had no technology to rely on, aside from messy, overgrown excel spreadsheets.

As large health systems across the country – especially those serving large Medicare and Medicaid populations – focus on identifying in-house savings that don’t sacrifice quality or patient satisfaction and meet ACA requirements, financial executives must take the lead for their organizations, but they can’t do it alone. The most successful cost-saving strategies are those that are grounded in a meaningful collaboration among finance, operational leaders, and physicians. The process should be informed by finance, but led by operational and clinical leaders. Reducing cost is not just a ‘finance problem’ as it was considered in the past. “Bending the healthcare cost curve is one of the great socioeconomic opportunities of our time. Cost reduction is not a passing trend—it has become mission critical for healthcare providers,” stated Dan Michelson, Chief Executive Officer of Strata Decision Technology. 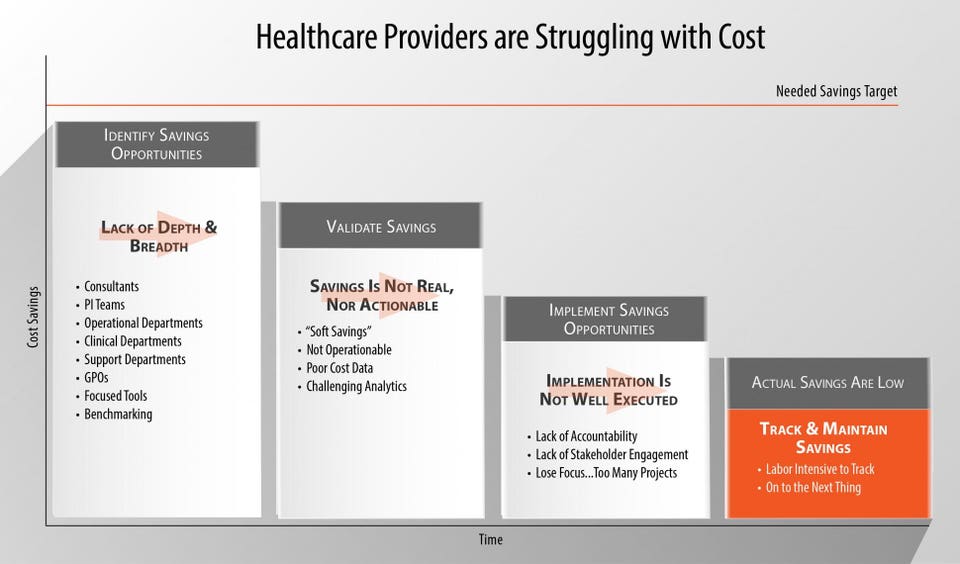 The Cost Of Savings Costs

Liz Kirk, Vice President for Cost Improvement Solutions at Strata Decision Technology, drove a major cost improvement initiative in her prior role at Northwestern Memorial Hospital. Under her leadership over a two-year period, Northwestern reduced their cost per case mix index (CMI) adjusted case by over 15%. However, Kirk also learned that there is cost for taking out cost. She estimates that Northwestern’s cost improvement initiative ran the organization about $11 million, in terms of staff time.

Kirk describes undergoing cost savings initiatives at hospitals today, as being a lot like ice fishing. “Organizations tend to go to the tried and true fishing holes to find savings. Then, it requires a lot of hard work to drill into the cost savings idea to determine how much can be saved, if anything at all,” explains Kirk. “After all that hard work, there may be a big fish. Or there may not be any fish, or maybe just a small fish. Unfortunately, to find more cost savings, you have to try another fishing hole and go through the same, arduous manual process, again and again.”

For the last 15-20 years, hospitals have focused on growing their top line revenue through technology to maximize reimbursement and decrease uncompensated care. Cost is rarely scrutinized and managed to the same level of detail as revenue has been. Strata Decision’s StrataJazz Continuous Cost Improvement potentially changes that for entire systems. The application contains pre-built algorithms that identify and quantify opportunities to eliminate waste, inefficiency, and variation across the organization, then provides on-going tracking and workflow to build accountability for results.

Rather than ice fishing, cost savings becomes more like net fishing – hospitals can choose the best opportunities to pursue for their organization, then actually spend time designing improvements, rather than doing math.

Although physicians are often rightly skeptical when financial leaders share data on practice variation, patient interactions and cost per case, the new world of health care reform demands that the two sides learn to work together. To remedy this at Yale New Haven, the leadership developed a common language with the clinicians that uses agreed upon metrics that they call quality variation indicators (QVIs), in which speaking the same language can help hospitals redesign practices and improve quality.

Yale New Haven partnered with Strata and achieved great success at driving out costs because each step of an encounter could be recognized and tracked, creating an accurate picture of an entire episode of care. Yale primarily focused on reducing variation in clinical practice that may result in adverse outcomes, which resulted in an estimated $125 million cost savings – or about a 20% reduction in cost per case.